First preparation weekend for the IYM 2018 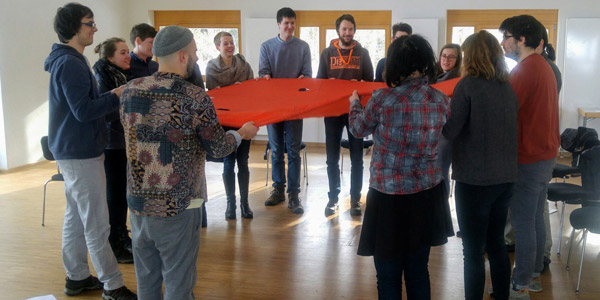 From the 2nd to the 4th of March 2018, the team of the International Youth Meeting met in the facilities of the “Jugendsiedlung Hochland” in Königsdorf, Bavaria, in order to develop a schedule for the IYM 2018 together. Also taking part in the meeting were staff members of the KJR Dachau.

Along with “ice-breaker activities” and team-building games, they mainly worked on the conceptualization of the IYM 2018. Having been prepared by advices on designing workshops and new methods, the teamers developed workshop ideas for the IYM 2018, that are going to be finalized conceptually until the second preparation weekend. The following workshops are probably going to take place on this year’s IYM.:

The team developed a diversified program on the first preparation weekend, that includes recreational activities, guided tours and outings, alongside the workshops and eye-witness interviews. Also, on the occasion of the 20th anniversary of the International Youth Hostel Dachau, this year’s “Fest der Begegnung” is going to take place in the shape of a large street festival.